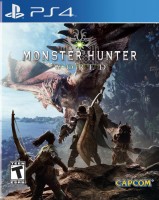 Capcom has confirmed that it will be releasing Monster Hunter: World in the fall of 2018. The game releases for Xbox One and PlayStation 4 later this month. According to a recent announcement, the PC version is still far from finished. The developme..

Capcom has released a new gameplay video for the upcoming hack and slash RPG game Monster Hunter World. The game was announced last month. Monster Hunter: World is said to introduce a living, breathing ecosystem in which players strive to become the..

Capcom has announced a new game in the Monster Hunter franchise. The game is titled Monster Hunter World. Monster Hunter: World is said to introduce a living, breathing ecosystem in which players strive to become the ultimate hunter. Players will be..

ZeroLives.com is a company from Moonlight Multimedia.
Find us on
Contact Advertise Apps Newsletter Scoring policy Guestwriting Terms of service
Edition:
English
Nederlands
Deutsch
© 2011 - 2021 ZeroLives.com. All rights to their respective owners. Looking for software development? Click here.
An error has occurred
Cancel No Yes OK
ZeroLives.com
Get the official mobile app
Install now Install now
close
Do you want to receive notifications for breaking news?
Enable notifications
No spam. Just news.
Weekly newsletter
Stay updated with our weekly newsletter. The latest news in your e-mail inbox every Saturday.
done
Subscribe
close
No thanks!
Thank you for subscribing
close
Close