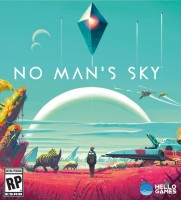 No Man's Sky Beyond update gets new trailer, to release next week

Development studio Hello Games has released a new trailer for its No Man's Sky Beyond update. The update releases next week for all platforms. The new Beyond update was announced in March and combines what was initially planned to be three large sep..

No Man's Sky to get VR support with Beyond update

Hello Games has announced it is working on a new major update for its space exploration game No Man's Sky. The update will introduce what the studio calls No Man's Sky Online. The update is said to include three major components, of which the first ..

No Man's Sky's Next update gets first trailer, to release this coming Tuesday

Development studio Hello Games has released a first trailer for the upcoming Next update for No Man's Sky. The update releases next week. According to a recent press release, the Next update will introduce various new major gameplay mechanics, inclu..

No Man's Sky will be getting a major multiplayer update on July 24, 2018, along with its release on the Xbox One console, development studio Hello Games announced. According to a recent announcement, the new upcoming multiplayer component has been i..

No Man's Sky Beyond update gets new trailer, to release next week

No Man's Sky's Next update gets first trailer, to release this coming Tuesday