A former student of Luke Skywalker has betrayed the Jedi Academy

The iconic Star Wars game Star Wars Jedi Knight 2: Jedi Outcast will be releasing for the Nintendo Switch and PlayStation 4 later this month. The original game released in 2002.


The new release of the game will likely only include the singleplayer mode, according to a recent Nintendo announcement.

No one likes ads. We know that. But ads help us pay the bills. sentiment_dissatisfied
Please whitelist us in your adblocker software so that we can continue to provide quality content.
Ad complaints? Contact us.
Advertisement
The game originally released in 2002 for the PC, Xbox (original), and GameCube. While the singleplayer campaign received praise back in the days, the multiplayer mode of both Jedi Outcast and Jedi Academy was also played extensively. 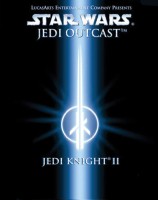