Starbreeze Studios has announced that it is giving away five million copies of the shooter game Payday 2 on Steam. The giveaway lasts until June 21st 2017 or until all copies have been claimed.


In the game players are part of a gang that must complete various criminal activities, including robberies of banks, shops and armored cars, and producing and distributing narcotics. Players can play together with up to 3 friends or play with bots.

No one likes ads. We know that. But ads help us pay the bills. sentiment_dissatisfied
Please whitelist us in your adblocker software so that we can continue to provide quality content.
Ad complaints? Contact us.
Advertisement
The shooter game released in 2013 and has received numerous content updates since its debut. A virtual reality update has also been announced for the PC version of the game.

The giveaway may be related to the imminent reveal of the sequel to the game, which is likely to be titled Payday 3. Starbreeze Studios confirmed that it was developing the game back in May 2016.

To claim a copy of the game players simply have to log in to their Steam account and visit the game's Steam Store page.

Payday 2 to stop support of microtransactions 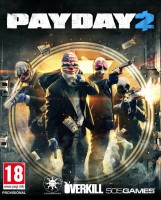 This comment has been removed. Thanks just claimed mine o/

Payday 2 to stop support of microtransactions