Injustice 2 is the direct sequel to the hit super hero fighter game Injustice: Gods Among Us. Like its predecessor, it brings intuitive mechanics and a fresh coat of graphical paint that put it head and shoulders above its competition this year.


This worthy sequel improves over its predecessor in every way possible. Gone are the days of outright broken "meta" characters and downloadable content additions to the roster that do more to infuriate fans than add varied gameplay.

No one likes ads. We know that. But ads help us pay the bills. sentiment_dissatisfied
Please whitelist us in your adblocker software so that we can continue to provide quality content.
Ad complaints? Contact us.
Advertisement
The roster has a wide variety, the animations are crisp and the combos connect with uncanny accuracy. Injustice 2 takes every mistake of Mortal Kombat X and Injustice: Gods Among Us and eliminates them for a superior fighting game experience.

The brutal kicks and gut punches of Mortal Kombat X return and are enhanced with the superhuman abilities of the DC comics cast. Blocks, combo strings, environment bounces and stage transitions all make a comeback from Injustice: Gods Among Us.


This time it seems as though the developers have hit another home run, the likes of which we haven't seen since Mortal Kombat 9. The game runs at a rock solid 60 frames per second on all platforms and, considering the visual improvements of the PC version, it is especially appreciated.

This results in a gameplay experience that is smooth as silk through all the possible combos, character interactions, grabs and counters. Characters like Black Canary who string together twenty hits at a time perform with utmost accuracy in every situation. A split second makes all the difference in reacting to your opponent, as it should be in every fighting game.

The new Gear System is a particularly interesting addition. From common to epic gear there are boosts you can apply to your character in a noncompetitive setting. These items can also be used to style your fighter to your liking.

As players accumulate experience they eventually level up their characters and the four available stats strength, defense, health and ability increase as a result. These stats can also be affected by equipping certain gear.

The gear that drops can be categorized in three different categories: equipment, shaders and abilities, and all these can be acquired either by playing normally and waiting for them to drop or by purchasing them with an in-game currency.
Review: Injustice 2
The game also features a lootbox system that seems to be almost identical to the one featured in the shooter game Overwatch. The way players collect boxes down to the way they are opened is all very similar and, depending on whether you like lootboxes, give the same gratifying experience as if you're opening christmas presents.

Lootboxes can only be acquired with in-game currency so, unlike many other lootbox games, there is no way to acquire them by spending real currency. However, the game does contain a microtransaction system where players can purchase "Source Crystals" to acquire cosmetics, such as skins, shaders and gear transforms.

The Transform Gear microtransaction option lets players apply the visuals of one piece of gear to another, allowing them to match their preferred stat modifiers with a costume piece of their choice.

Because lootboxes aren't purchasable with real currency they also seem to be handed out a lot more frequently than other titles. Players will find to have collected well over 50 lootboxes in their first 10 hours of gameplay.

Generally speaking, players will acquire enough lootboxes and in-game currency through normal gameplay that they really don't have to worry about having to purchase cosmetics via microtransactions, unless they specifically want cosmetics without spending time, of course.

In ranked or competitive multiplayer game modes all of the stat changing items are disabled, meaning that players will find a level playing field when playing online where only a player's skill and experience will help them win a battle.
Review: Injustice 2
Prioritizing physical damage, ability damage or being able to take more hits in general is all possible and adds a strategic layer to activities like the new Multiverse Mode or even just pitting your character against friends for some over the top "gear based" battles.

The Multiverse Mode is a brand-new addition that keeps replayability high while encouraging players to try out the rest of the varied roster. I stuck to Black Canary for that martial arts skill, but over time I ended up switching at least three times to characters the game incentivized me to play.

After giving every character a try it is easily among the most balanced rosters I've seen from this studio. Mistakes fall on the player more than on the character you select, as it should be. Some matchups are unfavorable, but player skill is paramount in coming out with a win, especially in competitive online play.

Multiplayer is stable and has all the offerings you would want: local split screen, ladder matches, leaderboards, simulations (AI vs opponent AI) and the good old-fashioned ranked matches.

The servers match you up with people who have similar internet connection speeds so instability was never really an issue.

Injustice 2 is simply an ideal package as it offers everything you would want from a fighting game on top of a very competently made singleplayer campaign.


If you've read any Brainiac invasion comic ever you pretty much get the gist of Injustice 2's singleplayer story. It is well-scripted and the characters all feel ripped straight from the comics, which is the best part about it.

But the story itself just acts as a vehicle to put Superman and Batman's factions into an uneasy alliance and then conflict wherever the plot allows.

In the game Superman and Batman are rivals as Batman tries to restore society after Superman's Regime fell.

Ultimately, the final battle has two possible outcomes depending on whether the player sides with Superman' plan to kill Brainiac or with Batman's plan to depower Superman permanently.

All the classic voices are back for Batman, Superman, Harley and others, which elevates the would-be average experience to a pretty good "DC animated feature" level of quality. However, had the plot explored the moral quandaries of superheroing instead of an invasion plot the game would have been much better off.

What we are left with is an average plot with above average execution in terms of voice-overs and scripting. All characters feel indentical to their rendition of the original and so character arcs continue naturally in this sequel.

There just aren't many new dynamics to speak of which is unfortunate for an otherwise stellar sequel. The story is between 5 to 8 hours long depending on the selected difficulty and player skill, which is sizeable for a fighting game.
Review: Injustice 2


The five month wait for a PC version has been long but well worth it because it runs almost flawlessly. The improved graphics and performance, the wide range of graphics options and the ability to access multiplayer free of charge make the game well worth the purchase, even for those who have already purchased the console version of the game.

Injustice 2 can be considered the best looking fighting game to date, sorry Soul Caliber, and a titanic step up from the original. Particle effects, textures, v-sync are some of the options included in the PC version and they all work as expected. Wonder Woman doesn't look like He-man so that is always a plus as well.

The console version features no graphics options, but still manages to impresses as it features very similar level of visual quality with few drawbacks. In terms of graphics, you can't go wrong with any copy of this title.


On the soundtrack side things are downright average. The game features a soundtrack that is largely recycled or close to the one of the original. The new tracks serve their purpose but didn't make me feel any more engaged in the story or gameplay as time went on.

As this is not a story based role-playing game, I wasn't expecting Hans Zimmer levels of awesome, but the music could definitely have used some additional attention to elevate the experience.


The user interface does exactly what it should do and doesn't detract from the experience. Combos, super moves, frame timings, enemy positioning, displaying which player is paused, extensive graphics options and gear scores are all made easily accessible to the player.

Transitions between menu screens is simple and you don't have to dig to find what you're looking for. Whether in a match or the main menu you have everything you need to keep the experience convenient and to your liking.
Review: Injustice 2


Injustice 2 takes every issue I had with the first game and ups the ante for an excellent sequel. The improvements to gameplay, the new singleplayer campaign and Multiverse Mode feature enough content to last for weeks.

Those who are into collecting cosmetics will also easily spend hours doing so and the addition of the in-game currency only lootbox system helps prolong that experience.

On top of all that, the PC version features improved graphics and performance, the wide range of graphics options and free multiplayer, making it an interesting deal even for those who have already played the original console version.

The elements that matter most, such as gameplay and user interface are all sights to behold and the available combos are all worthy of mastering.

However, the soundtrack and narrative could have been better even though the story offers much more than other fighting games of the past. Overall I'm excited for what this franchise has to offer in the future, either with further improvements or new titles.

I can't imagine a better example of a sequel that improves this much over its predecessor and washes away the competition in the process. This game is a must play for comic fans and fighting game gurus alike and is more than worth the asking price. 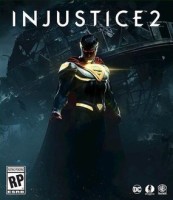 Injustice 2 gets new "Everything you need to know" trailer