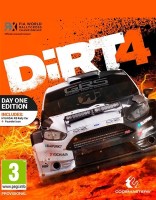 Giveaway: Your chance to win a copy of the racing game DiRT 4

We're giving away a copy of the recently released racing game DiRT 4. The game is the direct sequel to DiRT 3. DiRT 4 was released earlier today for most of the major platforms. The new game combines the realism featured in the spin-off game DiRT Ra..

Codemasters has released a the launch trailer for the racing game DiRT 4. The game released earlier today. DiRT 4 includes similar game modes as those featured in DiRT 3, including white-knuckle truck and buggy racing in the Landrush game mode. The ..

Codemasters has released a new trailer for DiRT 4 that features new gameplay footage. The trailer is a first look at some of the tracks and vehicles included in the game. DiRT 4 will include similar game modes as those featured in DiRT 3, including ..

Codemasters has released a new developer diary video for the upcoming racing game DiRT 4. The video includes new gameplay footage of the game. DiRT 4 was announced in January when the development studio released the announcement trailer for the game..

Codemasters has released six new DiRT 4 screenshots via its development blog. The new images show the high fidelity graphics featured in the game. The new screenshots show the level of detail of the vehicles and environments included in the new raci..