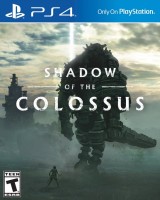 Shadow of the Colossus

New videos uploaded on YouTube show several PlayStation 3 exclusive titles being emulated on the PC via the RPCS3 emulator. Work on the emulator started several years ago. The new videos were uploaded by YouTuber reznoire and show several console ex..

Sony Japan has released a new trailer for the upcoming Shadow of the Colossus remake for PlayStation 4. The game launches next month. The game's storyline focuses on a young man named Wander who enters a forbidden land. Wander must travel across a v..

Bluepoint Games has released a new developer diary video for the upcoming remake of Shadow of the Colossus. In the video developers of the game discuss the game's graphical overhaul. The game's storyline focuses on a young man named Wander who enter..

Sony has revealed the release date for its upcoming Shadow of the Colossus remake. The game will launch on February 6, 2018. The game's storyline focuses on a young man named Wander who enters a forbidden land. Wander must travel across a vast expan..

Sony has released a new gameplay video of its upcoming Shadow of the Colossus remake. The gameplay video was shown during Sony's Paris Games Week 2017 press conference. The game's storyline focuses on a young man named Wander who enters a forbidden ..