The game follows up the studio's previous release Tower of Guns and it borrows many of its gameplay mechanics. However, merely calling it an update of that game wouldn't do it justice as its contains enough new mechanics and new content to differentiate itself.

No one likes ads. We know that. But ads help us pay the bills. sentiment_dissatisfied
Please whitelist us in your adblocker software so that we can continue to provide quality content.
Ad complaints? Contact us.
Advertisement
It released earlier this week for PC, Xbox One and PlayStation 4 and currently retails for $24.99 in North America and €24.99 in Europe. The free demo Mothergunship Gun Crafting Range is also available, which gives players a taste of the gun customization.
Review: Mothergunship


Mothergunship's story isn't the most interesting or the longest but it more than makes up for in colorfully written characters and gameplay integration. You are a nameless and voiceless "recruit" soldier who is tasked with destroying an alien mother ship called a Mothergunship.

The game's story is simple with a few twist and turns along the way. The writing combined with superb voice acting makes the game's narrative very enjoyable. Pop culture references are used sparingly and jokes are more subtle, which can be considered a very virtuous gesture nowadays.

Another great thing that Mothergunship has done well was gameplay integration. In theory, Mothergunship is a game than can be played forever and the story's ending sets this up in a very clever way.

The only thing that hinders this game's narrative is that the credit rolled a bit too early even though there was still some story to be told. I was able to roll the credits at around my 10-hour mark and that includes quite a bit of side questing.


As previously mentioned, the studio behind the game also worked on the shooter game Tower of Guns, where Mothergunship borrows many of its gameplay mechanics.

The main thing that is new in Mothergunship is the heavily customizable arsenal. There is a huge variety of guns and attachments that can be mixed-and-matched to create the perfect loadout.

Customization is essentially split up in three different categories: connectors, barrels and stat-altering caps. This makes the customization system intuitive for all types of players.

The customized guns are balanced by an energy system: the crazier your gun, the faster it will burn through energy. This kind of forces players to balance their guns, but still provides plenty of options to go crazy with.

Gun customization can even change the way you play and the way you traverse each room. Players have a simple upgrade tree for their armor as well to upgrade their health, energy consumption, and more.

The objective of the game consist of clearing rooms filled with turrets, drones, environmental hazards and traps. The rooms are very well designed considering that there are a lot of them. However, some of the rooms are repeated in some levels. After clearing them, each level gives random rewards such as coins, experience, new guns or a combination of everything.

Death has a very high price to pay like most roguelike games. All items in the player's inventory will be wiped, even the ones that were brought in during the mission. This is where Mothergunship truly shines. Not only does this give another degree of difficulty to an already difficult game, it gives the player a risk-reward in almost every situation. Do you elect to possibly double your loot by clearing the room or push towards the end to cash out?

Some people might think these types of games may come off as repetitive, but games like The Binding of Isaac are popular for a reason and Mothergunship has the pedigree to be in the top.
Review: Mothergunship


Some say that the best sound design is when you don't notice it; this is not the case for Mothergunship. This game has great sound design and it is in your face almost all the time.

The music of Mothergunship isn't mind-blowing like the 2016 remake of DOOM but it does get you hyped up. When the guitar starts, you know it's time to let it rip.

Most importantly, the sound effects of each gun correspond to their payload, as they should, and that's all you could really ask for.


Mothergunship has the capability to dethrone The Binding of Isaac as the king of roguelike shooters. The decent story, awesome gameplay, and kick-ass customization will draw people in.

If Terrible Posture Games continues to support this game in the future and fulfills all of their promises made towards their growing community, such as co-op multiplayer, this game will be one of the best roguelike shooter games on the market. Now, if you will excuse me, I want to play more of this game. 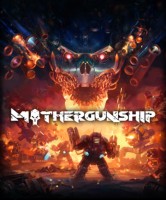