Explore Feudal Japan and fight against the Mongol Empire

The PlayStation 4 exclusive Ghost of Tsushima will be releasing in the summer of 2020, development studio Sucker Punch confirmed earlier this week. The game was announced in 2017.


The new game is set in Japan in the year 1274. Samurai warriors are the legendary defenders of Japan, until the fearsome Mongol Empire invades the island of Tsushima, wreaking havoc and conquering the local population.

No one likes ads. We know that. But ads help us pay the bills. sentiment_dissatisfied
Please whitelist us in your adblocker software so that we can continue to provide quality content.
Ad complaints? Contact us.
Advertisement
As one of the last surviving samurai, the player will rise from the ashes to fight back. But, honorable tactics won't lead them to victory. They must move beyond their samurai traditions to forge a new way of fighting: the way of the Ghost.

The game is advertised as an open-world adventure game, indicating that players will be able to freely explore the environments. The game will also support the PlayStation 4 Pro to render in 4K resolution at 30 frames per second.

Ghost of Tsushima is scheduled to release in the summer of 2020. A specific release date was not announced. 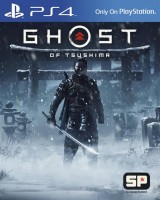 Ghost of Tsushima
Sucker Punch
Platforms
PlayStation 4
assignment
Learn more
Advertisement
No one likes ads. We know that. But ads help us pay the bills. sentiment_dissatisfied
Please whitelist us in your adblocker software so that we can continue to provide quality content.
Ad complaints? Contact us.
Advertisement
subject