Riot Games has released a new gameplay video of its Counter-Strike clone Valorant. The game is scheduled to release later this year.


The game is described by the development studio as a "5 versus 5 character-based tactical shooter". The gameplay released, however, shows clear resemblances to that of Valve's competitive shooter game Counter-Strike: Global Offensive.

No one likes ads. We know that. But ads help us pay the bills. sentiment_dissatisfied
Please whitelist us in your adblocker software so that we can continue to provide quality content.
Ad complaints? Contact us.
Advertisement
The twist to gameplay is what Riot calls "tactical shooter meets hypernatural powers". The character you select provides additional power-ups and abilities to beat players without necessarily having to focus on precise aiming and skill, similarly to Apex Legends.

The inclusion of character abilities in the shooter genre is what the studio considers gameplay for "bold strategists who dare to make the unexpected play, because if it wins, it works."

The game will run on 128-tick multiplayer servers and supports up to 144 FPS on modern hardware. The team aims to keep ping to these servers below 35 ms for players in major cities.

Valorant is scheduled to release this summer and will be free to play. A console release was not announced. 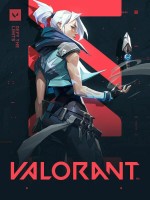 ZeroLives.com is a company from Moonlight Multimedia.
Find us on
Contact Advertise Apps Newsletter Scoring policy Guestwriting Terms of service
Edition:
English
Nederlands
Deutsch
© 2011 - 2021 ZeroLives.com. All rights to their respective owners. Webhosting by Moonlight Multimedia.
An error has occurred
Cancel No Yes OK
ZeroLives.com
Get the official mobile app
Install now Install now
close
Do you want to receive notifications for breaking news?
Enable notifications
No spam. Just news.
Weekly newsletter
Stay updated with our weekly newsletter. The latest news in your e-mail inbox every Saturday.
done
Subscribe
close
No thanks!
Thank you for subscribing
close
Close