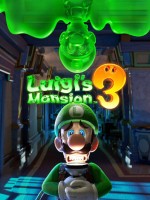 Luigi embarks on a dream vacation with Mario and friends. However, his dream quickly becomes a nightmare. With the assistance of Professor E. Gadd once again, the reluctant and cowardly hero Luigi traverses up and down a mysterious hotel with floors that are completely different from one another.

Nintendo has announced it is working on a new Luigi's Mansion game for the Nintendo Switch. The game has the working title Luigi's Mansion 3. The new game was teased with a 35-second long announcement trailer. The video shows Luigi entering his mans..