Nintendo revealed three characters for the Super Smash Bros. ultimate roster this week and each has its niche. The game releases next month.


Ken Masters of Street Fighter fame, Incineroar from Pokémon Sun and Moon, and Piranha Plant from the Super Mario franchise have been revealed as playable fighters.

No one likes ads. We know that. But ads help us pay the bills. sentiment_dissatisfied
Please whitelist us in your adblocker software so that we can continue to provide quality content.
Ad complaints? Contact us.
Advertisement
Ken Masters was dubbed an "Echo Fighter" of Ryu during Nintendo Direct earlier this week, citing clear similarities but some notable differences as well. Ken has a somewhat faster movement than Ryu, likely to play to his up close and personal strengths from the Street Fighter titles.
Ken Masters enters the ring
Nintendo
It was specifically noted that his Super Street Fighter II Turbo moveset is what players can expect Ken to play like. His Final Smash moves include the blistering Shinryuken uppercut and an earth-shattering Shippu Jinraikyaku kick flurry.

Incineroar, the 2nd evolution of Litten, sports a familiar arsenal to any Pokémon faithful. Darkest Lariat takes control of the close to mid range with a rotating furious spin attack.

His inputs, in general, utilize grapples and intrusive heavy attacks that seem to take priority over the moves of other fighters. His Final Smash "Max Malicious Moonsault" makes a return, initially a Z move featured in Pokémon Sun and Moon.
Incineroar loves to pose for the audience
Nintendo
Piranha Plant was also revealed separately as a DLC character. The character will be free for those who purchase the game before January 31, 2019. More importantly, its moves look especially creative.

Piranha Plant's mouth can stretch to strike opponents at ridiculous distances with a charged head launch, which is about half the length of a smaller stage. It utilizes what appears to be poison gas and its leafy appendages at close range along with fast and frantic movement.
Piranha Plant attacks with his unique moveset
Nintendo
This combined with its considerable range makes for a dangerous combination. Piranha Plant's Final Smash features a massive lumbering form of the character ready to knock some heads similar to Bowsers "Giga" form.

Super Smash Bros. Ultimate releases on December 7, 2018, for Nintendo Switch. The game features 74 characters in total at the time of writing. 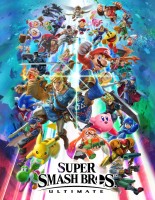