Koei Tecmo Games has revealed the release date for the game Nioh via a new trailer shown at Tokyo Game Show 2016 in Japan. The game will launch February 2017.


The gameplay of Nioh can be compared to that of games such as Dark Souls 3. The game features semi-realistic, high-stakes swordplay where one can die very quickly if not careful.

No one likes ads. We know that. But ads help us pay the bills. sentiment_dissatisfied
Please whitelist us in your adblocker software so that we can continue to provide quality content.
Ad complaints? Contact us.
Advertisement
Combat takes place in real time and features various weapon types such as katana, spears, axes, bows and Tanegashima rifles.

The player can switch between three main stances for any melee weapon: 'low' which is fast but weak and has an effective dodge ability; 'mid' which has the best blocking techniques but is neither fast nor specially powerful, and 'high' which causes the most damage with slower movements.

The console game will also allow players to select between a higher frame rate or higher display resolution, similar to options offered to players on a PC.

Nioh launches February 9th 2017 in all regions exclusively on PlayStation 4. 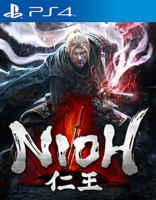