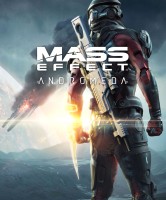 PC version of Mass Effect: Andromeda gets Day One patch to fix issues ahead of game's official launch

EA Games has announced that it has launched a Day One patch for the PC version of Mass Effect: Andromeda. The patch is required because the retail disc release contains game breaking issues. To inform gamers about the new patch the development studi..

EA Games has released a new gameplay video of Mass Effect: Andromeda. The new video focuses on the multiplayer game mode included in the game. In the video four players work together to take out waves of enemies, complete a series of objectives and ..