The new game is a remake of the original PlayStation game Crash Team Racing which released in 1999. In Nitro-Fueled, Crash is back in the driver's seat; the remastered edition features the authentic experience with several new additions.

No one likes ads. We know that. But ads help us pay the bills. sentiment_dissatisfied
Please whitelist us in your adblocker software so that we can continue to provide quality content.
Ad complaints? Contact us.
Advertisement
All of the original game modes, characters, tracks, power-ups, weapons and controls will be available along with several new karts and tracks to choose from.

The game also contains online multiplayer to race with friends and compete with leader boards.

The game is currently being developed by Beenox, a Canadian game development studio headquartered in Quebec City, Canada.

Crash Team Racing Nitro-Fueled releases on June 21, 2019, for PlayStation 4, Xbox One and Nintendo Switch. A PC release was not announced. 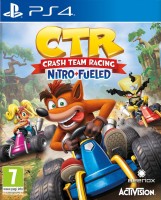