Nintendo will release new free downloadable content for Mario Tennis Aces. The content will release with the game's version 2 update later this month.


The new content was announced via a Nintendo Direct broadcast last week. The new update will introduce several new characters to the game, including Birdo, Shy Guy, Koopa Paratroopa and Peter Piranha.

No one likes ads. We know that. But ads help us pay the bills. sentiment_dissatisfied
Please whitelist us in your adblocker software so that we can continue to provide quality content.
Ad complaints? Contact us.
Advertisement
In addition to the new characters, the update will also introduce a new Co-op Challenge Mode in which players must complete online missions to unlock rewards, such as outfits and alternative versions of certain characters.

The Mario Tennis Aces version 2 update will be available on September 19, 2018. 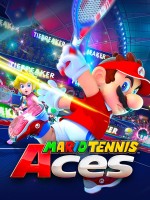