Ubisoft has announced it has delayed the shooter game Far Cry 5 and the racing game The Crew 2. The studio needs more time to finish the two games.

Far Cry 5 takes players to Hope County, Montana, land of the free and the brave, but also home to a fanatical doomsday cult known as Eden's Gate. Players will have to "stand up to the cult’s leader, Joseph Seed, and his siblings, the Heralds" and "spark the fires of resistance" that will liberate the besieged community.

The Crew 2 is the direct sequel to the original racing game The Crew. The game is set in the fictitious continent Motornation, a huge, varied, action-packed, and beautiful playground built for motorsports throughout the US.

In The Crew 2 players are said to be able to enjoy unrestricted exploration on ground, sea, and sky. The game will feature iconic locations such as snowcapped Rocky Mountains, the backstreets of New York City, the Mississippi River and the Grand Canyon. 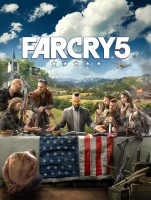