A closer look at the retro minigames

Square Enix has released a new trailer for its upcoming action role-playing game Kingdom Hearts 3. The game is expected to release later this year.


The new trailer focuses on the minigames that will be available within the game. These minigames are inspired by classic Disney shorts released many years ago, including The Karnival Kid, Giantland and The barnyard Battle.

Kingdom Hearts 3 is the twelfth installment in the franchise and is the direct sequel to Kingdom Hearts 2. The game has been in development for over 10 years.

In the game Sora will return as a playable character as he is joined by several other characters, several from Disney movies and cartoons.

The game is said to feature several improvements compared to its predecessor, including updated graphics, new ways of movement such as wall running and wall jumping, transformations, team-up attacks.

Kingdom Hearts 3 is expected to launch in the third quarter of 2018 for Xbox One and PlayStation 4. A PC release was not announced.

Kingdom Hearts 3 gets new "Together" trailer

Kingdom Hearts 3 gets new gameplay trailer, release date to be announced in June

New Kingdom Hearts 3 trailer features world of Toy Story, to be released in 2018 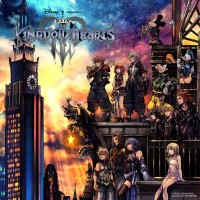 Kingdom Hearts 3 gets new "Together" trailer

Kingdom Hearts 3 gets new gameplay trailer, release date to be announced in June

New Kingdom Hearts 3 trailer features world of Toy Story, to be released in 2018