Nintendo has reconfirmed that Rayman Legends: Definitive Edition will be making its way to the Nintendo Switch on September 12, 2017. The release date was also shown on the website of a popular online retailer.

No one likes ads. We know that. But ads help us pay the bills. sentiment_dissatisfied
Please whitelist us in your adblocker software so that we can continue to provide quality content.
Ad complaints? Contact us.
Advertisement
The version that will be making its way to the Nintendo Switch is the "Definitive Edition". The Definitive Edition includes the base game as well as new exclusive content.

The Nintendo Switch version of the game will feature touchscreen support that can be used to take out enemies.

It also features a solo game mode in which players fight against AI enemies as well as a new tournament mode that allows players to battle against up to 8 other players by linking console's together.

Rayman Legends: Definitive Edition launches on September 12, 2017, exclusively for Nintendo Switch. The game will retail for $49.99 in North America and €49.99 in Europe. 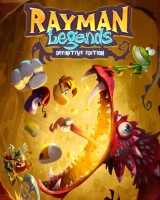