Quantic Dream's other interactive drama is also coming to the PC

Quantic Dream has announced it will also be bring Heavy Rain to the PC later this year. The game will be an Epic Games Store exclusive title for at least a year.


Heavy Rain features four protagonists involved with the mystery of the Origami Killer, a serial murderer who uses extended periods of rainfall to drown his victims.

No one likes ads. We know that. But ads help us pay the bills. sentiment_dissatisfied
Please whitelist us in your adblocker software so that we can continue to provide quality content.
Ad complaints? Contact us.
Advertisement
The player interacts with the game by performing actions highlighted on screen related to motions on the controller, and in some cases, performing a series of quick time events.

The game will be available an Epic Games Store exclusive title for at least a year. A Steam release was not announced yet.

The upcoming release follows the studio's previous announcement of a PC release for its thriller Detroit: Become Human. That game will also be a timed exclusive.

Heavy Rain for PC does not yet have a release date. 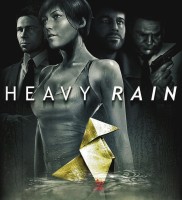 This comment has been removed. Not bad, but too bad it's epic games.