A game that re-captures old experiences for a niche audience

Blossom Tales: The Sleeping King can be best described as a combination of both The Legend of Zelda: A Link to the Past and the fantasy adventure comedy movie The Princess Bride. Despite several shortcomings, the game features an interesting narrative mechanic and fantastic gameplay.


The game is an top-down action roleplaying game featuring 8-bit graphics and sound effects. The story starts with a grandfather telling a story to his grandkids. The tale that the grandfather tells dictates the events that occur in the game and you as the player are able to influence some of the details.

No one likes ads. We know that. But ads help us pay the bills. sentiment_dissatisfied
Please whitelist us in your adblocker software so that we can continue to provide quality content.
Ad complaints? Contact us.
Advertisement
This is a very interesting narrative mechanic but there are only a few times where this was used and the choices that players make don't seem to be too dramatic for it to matter.

For one thing, the player wasn’t given a choice when it comes to the gender of the character. At the start of the game both Lily and Chrys are shown, but for some unknown reason Lily was chosen as the story's heroine, a missed opportunity because it would have been great if the player is able to choose from one of the grandkids.

The game's writing is quite good and there are plenty of references to other games such as the obvious Legend of Zelda and the more recent Shovel Knight. Dialogue can be hit-or-miss, however, because some of the references and jokes were a little too on the nose.
Review: Blossom Tales: The Sleeping King
The gameplay is fantastic because it is almost an exact copy of the popular Zelda game The Legend of Zelda: A Link to the Past. Everything was the same, from the health upgrades to weapons, so the game will feel quite familiar to those who have played A Link to the Past.

The world map is big with a variety of interesting locations to explore. There are five dungeons featured in the game and each has their own monsters and puzzles that are specific to its location.

The dungeons did not provide a challenge, however, because they were quite easy to navigate through, which can turn players off. It also seems that character models were reused in several instances.

Weapons are well laid out on the map, allowing the player to feel powerful but not overpowered. Though for most of them I recommend playing the game on a controller to time attacks perfectly.

The game fully supports controllers but does seem to contain some minor issues that can cause the game to crash if the player presses two face buttons while playing. The bug may be fixed in a future update.
Review: Blossom Tales: The Sleeping King
The 8-bit music included in the game wasn’t mind blowing, but does get the job done. There are variations between the dungeons and regions which sets the tone for each of them. The game even paid homage to The Legend of Zelda: Ocarina of Time by featuring a cover of the famous song Zelda's Lullaby in one of the regions.

To conclude, the game is pretty hard to recommend to people who have played The Legend of Zelda: A Link to the Past since it is far too similar to get anything out of it. However, those who haven't played it or those who are just here for nostalgia's sake will find a pretty decent alternative.

The game can take around 11 hours to beat and there isn't a much of an end game to speak of, unless you count the collectibles and treasure chests you haven't collected. 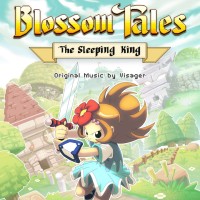 Blossom Tales: The Sleeping King
PC
The good
add_circle_outline
Recaptures old experiences
add_circle_outline
Decent writing
add_circle_outline
Same gameplay mechanics as Zelda games
The bad
remove_circle_outline
No real end game unless you count collectibles and teasure chests
remove_circle_outline
Choices don't have significant impact
7
Out of 10
Verdict
Good
Scoring policy
Share on Twitter
Share on Facebook
No one likes ads. We know that. But ads help us pay the bills. sentiment_dissatisfied
Please whitelist us in your adblocker software so that we can continue to provide quality content.
Ad complaints? Contact us.
Advertisement
subject
Related video games news

Blossom Tales: The Sleeping King to release for Nintendo Switch on December 21st

Blynn Beltran
Journalist at ZeroLives.com based in the San Francisco Bay Area. He also runs a blog about miniatures and other related things.
bubble_chart