The remastered edition of Assassins Creed 3 will be released in March, development studio Ubisoft announced. The company has also released a comparison trailer.


The remaster was previously announced as part of the season pass of Assassin's Creed Odyssey, but Ubisoft has now confirmed that the game will also be sold separately.

No one likes ads. We know that. But ads help us pay the bills. sentiment_dissatisfied
Please whitelist us in your adblocker software so that we can continue to provide quality content.
Ad complaints? Contact us.
Advertisement
The game released in 2012 for PC, Xbox 360, PlayStation 3, and Nintendo Wii U and was the fifth large-scale game in the franchise. The game is set in the 18th century during the American Revolution.

Assassin's Creed 3 Remastered is scheduled to release on March 29, 2019, for PC, Xbox One and PlayStation 4. A Nintendo Switch release was also rumored after an online retailer supposedly showcased box art for the release, but this has yet to be announced. 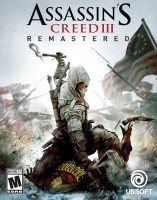