Development studio Machine Games has released a new developer diary video for the upcoming shooter game Wolfenstein 2: The New Colossus. In the video the game's developers discuss weapons and capabilities.

No one likes ads. We know that. But ads help us pay the bills. sentiment_dissatisfied
Please whitelist us in your adblocker software so that we can continue to provide quality content.
Ad complaints? Contact us.
Advertisement
Players will fight the Nazis in iconic locations such as small-town Roswell, New Mexico, the flooded streets of New Orleans, and a post-nuclear Manhattan.

The reveal trailer for Wolfenstein 2: The New Colossus was released last week during Bethesda's E3 2017 press conference. Another developer diary was also released last week in which the game's setting and storyline were discussed.

Wolfenstein 2: The New Colossus launches on October 27, 2017, for PC, Xbox One and PlayStation 4. 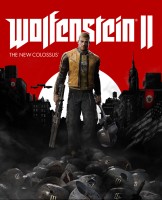