Bandai Namco has released the first trailer for the Japanese RPG game Code Vein. The game is currently being developed by the same team that worked on the God Eater games.


The game was first teased last month when the company released an animated teaser trailer for the game. At that time the title and story of the game were still unknown.

No one likes ads. We know that. But ads help us pay the bills. sentiment_dissatisfied
Please whitelist us in your adblocker software so that we can continue to provide quality content.
Ad complaints? Contact us.
Advertisement
In the game players are Revenants, vampires that possess supernatural powers. Players must use their powers to fight their way through several dungeons.

Code Veins will feature a co-op buddy system that will allow players to to team up together, though it is unknown if this functionality is limited to offline play only.

The game runs on Unreal Engine 4 to power its visuals and is likely to be making its way to the Xbox One and PlayStation 4. A PC release has not been confirmed yet. 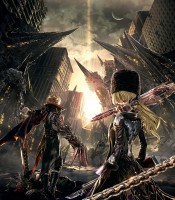