TT Games has released the launch trailer for the sandbox game Lego Worlds. The game was scheduled to launch in February but was delayed until March.


In Lego Worlds players can explore a procedurally-generated world made entirely of Lego bricks which players can freely manipulate and dynamically populate with LEGO models.

No one likes ads. We know that. But ads help us pay the bills. sentiment_dissatisfied
Please whitelist us in your adblocker software so that we can continue to provide quality content.
Ad complaints? Contact us.
Advertisement
The game world features a wide variety of content: from cowboys and giraffes to vampires and polar bears, to steamrollers, race cars, and colossal digging machines.

Players also have access to a multi-tool to shape environments and alter any world to your liking: by raising the terrain to create vast mountain ranges, or by entering the Brick-by-Brick editor to build anything they can imagine.

The game was scheduled to launch on February 21st 2017 but was delayed until early March because the game's developers needed more time to fix several bugs.

Lego World now launches on March 10st 2017 for PC, Xbox One and PlayStation 4. The game will also be making its way to the Nintendo Switch later this year. 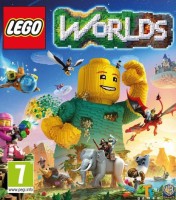