A stealth shooter in which you face learning AI

Indie science fiction action adventure game ECHO is a curious title developed by indie development studio Ultra Ultra. The game takes the conventions of stealth in a new direction with its setting, delivery of its narrative and unique gameplay mechanics.


The systems in place for stealth in ECHO are unique to the genre. The Palace, as the game calls it, is a labyrinthian planet where En, our main protagonist, is on a search to find a way to revive her mentor.

The Palace is a technological marvel that adapts to every action she takes by spawning clones that try to kill her. Eerily enough they look just like En so there is a light horror element present, especially when you teach them how to sneak about and choke you.

However, the AI doesn't behave in a nuanced enough way to properly support this system. Several sections in the game were skippable by sprinting through and ignoring enemies or by pushing them over, which is the one action they couldn't learn for some reason.

The AI is completely unable to deal with complex character action so long as several of the "echo" clones don't notice you at the same time.
Review: ECHO
The game features an interesting three-dimensional head-up display that allows players to scout enemy locations. However, the system suffers from several issues because of its average implementation. A simple lamp post can make spotting a red alert or yellow cautionary indicator a huge hassle. On top of that, when you do get spotted the AI just gives up its search after a few seconds.

Most of my deaths occurred because of my impatience with the repetitive nature of the game, just wanting to get to the next narrative cookie to keep me interested. The biggest source of its repetitive gameplay are the echoes that always learn the same few things on every stage.

There is no real upgrade system present the enemy can take advantage of. Movement itself feels sluggish and the cover system inconsistent. En's ducking animation exposes her head above surfaces yet echoes never notice her.

A tougher enemy is revealed in the last stage of the game and I couldn't help but think that enemy variety would have helped this title immensely. The echo system is one I hope to see better implemented in the future as it is too repetitive for my taste in its current form.
Review: ECHO


The story revolves around expository dialogue between En and London, her AI companion who is very sassy, and is all about Foster or, as En calls him, "Gramps". They discuss the possibilities of reviving him using En's cube and the technology of The Palace.

London is the naysayer while En is hopeful whilst facing terrifying odds. That is pretty much the entire plot until the end, and I was morbidly disappointed because there were no true twists and turns. The entire game is an elaborate revival mission for a character the player couldn't care less about.

It doesn't help that Foster is made to seem like a greedy kidnapper from London's perspective and En simply sticks to an idealized version of him from what she remembers.

Overall a very unimpressive narrative slog with strictly dialogue and no visual representation until the end of the game. The voice-overs lack in enthusiasm and its delivery hurts this game immensely with any progress in character development being thrown out the window because of it.


The Palace leaves a great first impression but as the game goes on environments seem like they are all using the same assets but mixed up in an attempt to make things interesting.

Most of the stages simply up the ante by increasing the number of enemies and sheer sneaking distance, which is essentially padding the game with a lengthier version of the same thing you've done before.

The color pallet doesn't change in a significant way until the Oblivion stage, but the same physical assets are used and the game reverts to the previous color scheme shortly after.

That being said, the visuals themselves are aesthetically pleasing but not mind-blowing. The anti-aliasing method used still hosts many jagged lines on surface edges, something that has been solved at higher settings in recent stealth titles.

If anything, the best feature is the usage of scripted lights in its environments, which creates a mysterious vibe and is something I haven't seen in games before.


User interfaces are all easy to navigate through, making setting up preferences as straightforward as can be. There is no upgrade system or metagame that keeps you in the menu. Overall graphics settings are the expected standard on PC and the user interface does what it should.


The soundtrack does its job just fine as it fits the atmosphere of the game. It is rather average considering there is nothing mind-blowing to speak of, but nothing negative either. The soundtrack won't annoy you, but it won't bring you to tears either.
Review: ECHO


ECHO is the middle child of the stealth genre, filled with just as much promise as disappointments.

The "echo" system is sound and offers a staple experience to the stealth genre, having never been done before. From this perspective I would recommend this title to any stealth aficionado searching for something interesting to play.

While many will be taken aback by the lacking AI and narrative, some will find some recompense in the unique overall experience offered here for stealth fans and otherwise. At its market price the game competently provides an experience far removed from the pack.

That being said, it is still a risky purchase, all flaws considered, because it has some problems that don't seem fixable by a simple patch. However, it is definitely worthy to be given a chance by anyone who stumbles upon it. 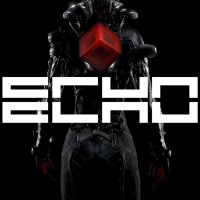