Indie development studio Bloober Team has released a new gameplay trailer for the Nintendo Switch release of its cyberpunk game Observer. The game is already available for other platforms.


In Observer players discover a dark cyberpunk world beset by plagues, war and squalor as they play as Dan Lazarski, an elite neural detective known as an Observer, and part of a corporate-funded police unit whose purpose is to hack and invade suspects' minds

The Nintendo Switch version of the game uses all of the unique features of the system, including full Joy-Con and touchscreen support, and the option to play both in docked and in handheld modes.

Observer for Nintendo Switch releases on February 7, 2019. The game is already available for PC, Xbox One and PlayStation 4.

Cyberpunk game Observer to make its way to the Nintendo Switch 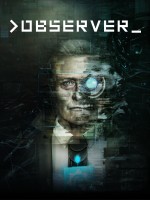 Cyberpunk game Observer to make its way to the Nintendo Switch