It is close to a release, but will not be making the original April release

Team Meat has announced it has delayed Super Meat Boy Forever. The game was scheduled to release in April.


According to a recent announcement, the team needs more time to develop the game. It noted that it is close to a release, but will not be making the original April release window.

No one likes ads. We know that. But ads help us pay the bills. sentiment_dissatisfied
Please whitelist us in your adblocker software so that we can continue to provide quality content.
Ad complaints? Contact us.
Advertisement
In the game Meat Boy and Bandage Girl always run through the levels, even when not touching controls. They can attack enemies, jump, jump attack, dive, and slide to make their way through various levels.

The levels included in the game will be dynamically generated based on a set of restrictions set by the game's development team to ensure the game creates interesting and engaging worlds. This is done by selecting from a randomly generated pool of chunks categorized by difficulty.

The next trailer that will be released later this month will contain a new release date. The team currently uses "After but not too far after April 2019" to describe the upcoming release.

Super Meat Boy Forever is expected to release before the summer of 2019 for PC, Xbox One, PlayStation 4, Nintendo Switch, Android and iOS. 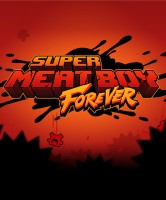