In the midst of the destruction, South Western Tokyo split off into the ocean

The hack and slash survival game Let It Die will be making its way to the PC this month, Japanese development studio Grasshopper Manufacture announced. The game was a PlayStation 4 exclusive.


Let It Die takes place in the year 2026 during a time when a large tectonic disturbance caused mass destruction around the world.

No one likes ads. We know that. But ads help us pay the bills. sentiment_dissatisfied
Please whitelist us in your adblocker software so that we can continue to provide quality content.
Ad complaints? Contact us.
Advertisement
In the midst of the destruction, South Western Tokyo split off into the ocean where the seismic activity caused a large spire to rise out of the ocean piercing the island creating a tower-like structure deemed holy by some.

Players fight through a treacherous tower obtaining various types of weapons and armor while finding creatures and mushrooms to eat in order to stay alive.

Upon death, a player's "death data" is circulated among other player's games where they will appear as formidable opponents called Haters. 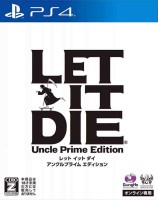