The original game was first released for the PlayStation Portable in 2008 and was critically acclaimed for its puzzle platformer gameplay. In the game players control a yellow blob named LocoRoco while he has to defend his planet from alien-like creatures named Moja Corps.

No one likes ads. We know that. But ads help us pay the bills. sentiment_dissatisfied
Please whitelist us in your adblocker software so that we can continue to provide quality content.
Ad complaints? Contact us.
Advertisement
The PlayStation 4 version of the game, which Sony Japan calls LocoRoco 2 Remastered, will run at 1080P resolution on the original PlayStation 4 and in 4K resolution on the PlayStation 4 Pro. The game will feature the same levels as the original title.

The first LocoRoco game also got a remastered edition, LocoRoco Remastered, and was released on May 9, 2017, for PlayStation 4. 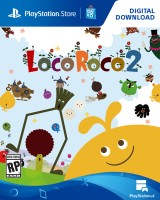 This comment has been removed. Bit of a stretch from Sony to call it remastered if the only thing changed is the rendering resolution.

This comment has been removed. It's a remaster after all ... yet they say Crash Bandicoot N. Sane Trilogy is a remaster when that's clearly a remake. I guess Sony doesn't understand the difference between remaster and remake, hm.