No one likes ads. We know that. But ads help us pay the bills. sentiment_dissatisfied
Please whitelist us in your adblocker software so that we can continue to provide quality content.
Ad complaints? Contact us.
Advertisement
All of the games featured in the trilogy will feature HD graphics as well as several additional tweaks and updates, such as real-time lighting in a Physically Based Rendering engine. The games will also feature support for the PlayStation 4 Pro as they will be runnable in full 4K native resolution. 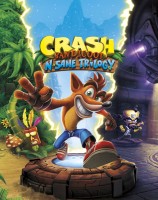