Capcom has released a new trailer for the upcoming adventure RPG game Monster Hunter XX. The game is coming to Nintendo Switch later this month.


The game is a direct port of the 3DS version that was released in March and as such features the same content as the original, though, unlike the 3DS version, the Nintendo Switch version will feature cross-play multiplayer for up to four players by linking consoles together.

No one likes ads. We know that. But ads help us pay the bills. sentiment_dissatisfied
Please whitelist us in your adblocker software so that we can continue to provide quality content.
Ad complaints? Contact us.
Advertisement
Players who own the 3DS version will be able to transfer their savegame to the Nintendo Switch version. Savegames from Monster Hunter Generations, or Monster Hunter X as it was titled in Japan, will also be transferable.

The new trailer shows the some of the new features included in the Nintendo Switch version. The newer version seems to feature slight graphical improvements, though players will still notice that the game was originally a 3DS title.

Monster Hunter XX for Nintendo Switch will launch on August 25, 2017, in Japan. Release dates for the regions North America and Europe have not been announced yet. 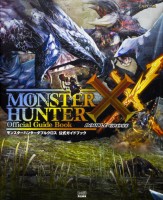