A brutal period of constant life and death conflict


In Sekiro: Shadows Die Twice you are the "one-armed wolf", a disgraced and disfigured warrior rescued from the brink of death. Bound to protect a young lord who is the descendant of an ancient bloodline, you become the target of many vicious enemies, including the dangerous Ashina clan.

Players will be able to explore 1500s Sengoku Japan, a brutal period of constant life and death conflict, as they come face to face with larger than life foes in a dark and twisted world. 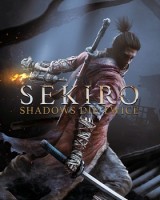